In 1994, researcher Mary Tai published “A Mathematical Model for the Determination of Total Area Under Glucose Tolerance and Other Metabolic Curves” in Diabetes Care, a peer-reviewed scientific journal. Mary Tai, according to the journal, was affiliated with the Obesity Research Center at St. Luke’s-Roosevek Hospital Center.

This paper claimed to be able to find the area under a curve by dividing the area into rectangles and triangles.

The trapezoidal sum, abbreviated TRAP, is a way to approximate the area under a curve by partitioning the limits of integration into a finite number of parts, and drawing trapezoids extending up to the curve. 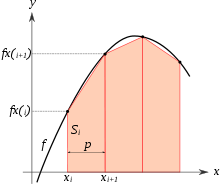 Mary’s paper, which still remains on the Diabetes Care website, has actually been cited by many medical researchers. Some even refer to it as “Tai’s Method.”

The paper has even been cited more than 300 times, according to Google Scholar. One wonders if medical researchers are referring to the trapezoidal rule as “Tai’s Method” in jest.